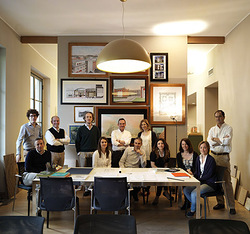 The studio was founded by Marco Brandolisio, Giovanni Da Pozzo, Massimo Scheurer and Michele Tadini in 1997. All four developed their professional vision in the architectural studio of Aldo Rossi beginning in 1982.
Over the years they became his closest collaborators in the Milan studio and were responsible for designing and partnering with him on various projects of relevant importance including: the German History Museum (DHM) in Berlin, the Bonnefanten in Maastricht, the Milan Linate Airport, the Schtzenstrasse and Landsberger Allee city blocks in Berlin, and finally the C. Catteneo University in Castellanza, Italy.
Since its beginning Arassociati has designed and constructed numerous buildings for both public and private use in Italy and across Europe. In its ventures, the studio seeks to expand its architectural prowess by pursuing continuity between the building and the environment of the city or territory while adhering to rational building construction principles.
Various projects have been published in magazines on architecture and other related sectors. In the last eight years of independent activity Arassociati has completed 70 building works, between actual buildings and competition entries for open and regulated contexts.