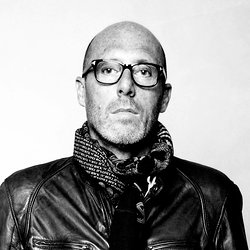 Christophe Pillet is a French designer who has won international acclaim for the spectrum and quality of his creations. Architecture, objects, furniture, art direction: his signature is invariably associated with the finest brands and projects of everincreasing weight and prestige. From transforming the Lancel boutiques across France and the rest of the Worldwide, designing the new Hotel Sezz in St Tropez, and the restaurant Guilo Guilo in Paris, to creating stands for Renault at international automobile shows: the scope and the variety of his projects share a common attitude, independent of scale. Whether it be as design director for Lacoste, or in long-term collaborations with Driade, Cappellini and Emu, his considered interpretations are a testament to high-voltage chic, distinguished both by its precision and rigor. Having been awarded his diploma from the Domus Academy (master class), he became part of the Memphis group (as an assistant to Martine Bedin, and Michele De Lucchi), when they led the vanguard of a new approach to design. Upon his return to Paris, Pillet was involved in the development of the Starck agency, during the period when American hotel interiors and the toothbrush were subject to a major reinvention.