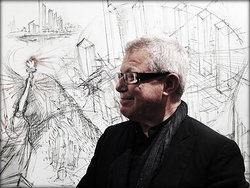 Daniel Libeskind was born in postwar Poland in 1946, but later became an American citizen in 1965. After music studies he received his professional architectural degree in 1970 from the Cooper Union for the Advancement of Science and Art in New York City. He received a postgraduate degree in History and Theory of Architecture at the School of Comparative Studies at Essex University (England) in 1972. His practice extends from building major cultural and commercial institutions - including museums and concert halls- to convention centers, universities, housing, hotels, shopping centers and residential work. Daniel Libesking has designed world-renowned projects: the Jewish Museum in Berlin, the new masterplan for World Trade Center in New York, the Grand Canal Theatre Project, Military History museum in Dresden, Creative Media Center are only few of the works developed by the studio. The firm is actually working on several building worldwide and has received awards and prizes.