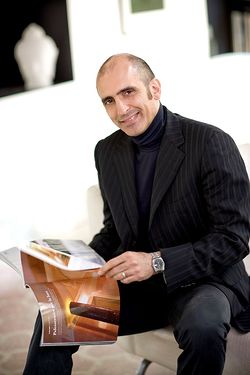 Silvio De Ponte, architect and lighting designer, founder of De Ponte Studio Architecs | DPSA+D SRL. Degree in Architecture in Florence, where sign as Researcher at the Department of Technology of the Architecture.
After graduating in architecture, he worked several years as a set designer in the theatrical world, collaborating with several international companies and numerous directors, among which includes Giorgio Strehler and Bob Wilson. During this 5 years life experience, he has acquired knowledge and skillful use of light which, in the present work as an architect and designer, moved into his architectural projects and interiors.
In 1987 it attends the Domus Academy of Milan where takes a Master in Urban Set designing with Andrea Branzi. From 1990 until 1994 works with Pierluigi Cerri at Gregotti Associated of Milan, where he is responsible for the project area of interiors and design. His methodology is set up by an interdisciplinary orientation and of contamination of the families and of the languages. An approach based on the connection and on the exchange between professional activity, work of research and of experimentation that is made clear by means of the teaching close to the most prestigious Italian Universities and International Schools, through conferences, lectures and workshop close to international universities, cultural realities of excellence and companies of high prestige. In the professional activity, of participation in exhibitions and in cultural events, particular attention is put in search of renewable and active fountains of energy passive, in the echo – compatibility from the materials and in the evolution of the architectural space by means of new shapes of supportability for the man obtained with the study of the qualities soft of the architecture (material – not material).
Silvio De Ponte plays research in the relationship between man and space in reference to his sensorial perceptions: tactile surfaces, olfactory pathways, sound spaces and light modulation are all primary tools of De Ponte Studio’s creativity. Research and planning and methodological study on the materials, on the relationship between Light and Matter and the language of Light and Color, further gains in a vital importance, in order to defining new scenery of the lived space, at the interior design up to the industrial product. Many of Silvio De Ponte achievements are published on important and prestigious international and national magazines of Architecture and Interiors. Silvio De Ponte has received many interviews on TV in the matter of his international work and design philosophy. He has also took part in live broadcasts on National Televisions and on satellite showing its work and discussing the future of design.
According to a concept of Global Design, he plans Public Works, Theatres, Hotel, Businesses, Exhibition Preparations, Villas and Penthouse and product design. He also designed the illumination for architectures and urban, internal spaces and Products of Design for important Italian and foreign companies. Beside the publication of numerous projects on reviews and Italian and international books he unwinds editorial activity for some Italian reviews of architecture and design.