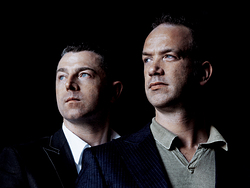 Designed for people. An obvious sentiment perhaps, but one that is often forgotten in an era when design saturates day-to-day life. For FG stijl, designing for people was a seedling idea from which sprung countless three-dimensional experiences, and now, more than a decade on, it is the expression of their interior design company’s DNA.
In March 2005 they celebrated their tenth anniversary. The first decade produced a prolific body of work, the culmination of which was expressed in their native Amsterdam’s award-winning The College Hotel, which coincidentally opened in their anniversary year. These efforts secured the Prix Villégiature award for ‘Best Hotel Interior Design in Europe’ and the Theme.nl 2005 Award for Best New Hotel Design in the Netherlands, as well as a place on the Condé Nast Traveller magazine’s Hot List for 2006. It was early in their careers that they, the FG stijl founders Colin Finnegan and Gerard Glintmeijer (the ‘F’ and ‘G’ of FG stijl), secured commissions to give shape to their vision in four of the Netherlands’ Michelin starred restaurants. The Michelin world embraces ambience almost as much as it does gastronomy and designing for users at the pinnacle of this international standard ensured that quality and people have always shaped the way that they design.