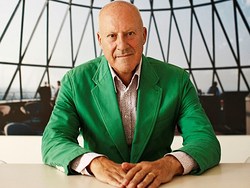 Foster + Partners, based in London, is a global studio based in London for sustainable architecture, urbanism and design, founded by Norman Foster in 1967.
Since then, he and the team around him, have established an international practice with a worldwide reputation.
With offices across the globe, they work as a single studio that is both ethnically and culturally diverse.
Norman Foster was born in Manchester in 1935, and after graduating in Architecture and City Planning from Manchester University in 1961, he won a Henry Fellowship to Yale University, where he was a fellow of Jonathan Edwards College and gained a Master’s Degree in Architecture.
In 1967, he established Foster Associates in London with his late wife Wendy.
Over five decades the practice has evolved and been responsible for a strikingly wide range of work, from urban masterplans, public infrastructure, airports, civic and cultural buildings, offices and workplaces to private houses and furniture design.