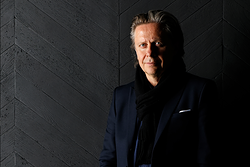 Jean-Philippe NUEL was born into a family of architects impassioned by design and contemporary creations. Having obtained his architectural diploma at the Ecole Nationale Supérieure des Beaux-Arts de Paris, he gained rapid recognition by winning an international competition presided over by Kenzo Tange. Shortly afterwards, he went on to design a Paris hotel in the capacity of principal contractor for architecture and interior design. Today his agency is active in Japan, the Middle East and of course in Europe, working not only on hotel projects but also private residences, spas, concept stores and restaurants.