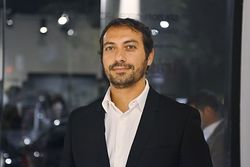 Alessandro Scandurra was born in 1968, he graduated from the Politecnico di Milano with a thesis on the urban revalorization of an area on the outskirts of Milan. Since 1993 starts a collaboration with the architect Umberto Riva, dealing with architectural design on a variety of scales: urban planning studies, landscape architecture, historical building preservation, exhibition installation design. In 1997 designed the scenography for the opera Fidelio for the open-air Berlin National Opera production commemorating the 3000th anniversary of the Jewish city of Jerusalem.
In 2001 he founded Scandurra Studio. He pursues his professional career in parallel with research, publishing and teaching activities. Visiting professor at SUPSI Lugano-based Swiss University since 2005, he has been teaching at the Milan Polytechnic from 2004 to 2007.
In 2011 he published the book “Carlo Scarpa e l’origine delle cose” and in 2012 he has been nominated Head of Advisory Board of Portaluppi Foundation.