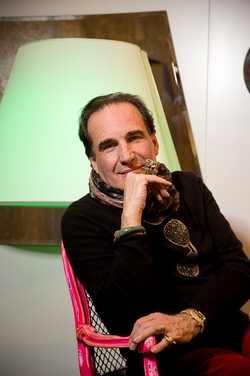 Carlo Rampazzi, the Swiss architect and designer from Ascona, obtained his qualifications in architecture and interior design in Lugano and Paris.
He began his career in the 1970s as an international designer, creating a neo-maximalist style that interpreted classical furniture with a contemporary twist.
In 1974 he founded his company Selvaggio SA, with his main office in Ascona,Switzerland. Pursuing this creative path, in 1988 he worked with Alessandro Mendini at Abitare il tempo, in Verona. Since the early 90s he became one of the most successful interior designer of the world, leaving his unmistakable mark on many well known projects, among them the Grand Hotels Tschuggen, Arosa, Eden Roc, Ascona or Carlton, St.Moritz.
In 2003 he established in collaboration with Sergio Villa his own line of limited furniture editions, accessories and fabrics. Recently he discovered an interest in fashio- and shoe design. His creativity opens the doors of the houses of the world most thought after families who not only appreciate his artistic talent, but his ability to understand their dreams and imaginations.
Carlo Rampazzi’s new concept, “Maximinimalismobili ” should be understood as an answer to the current mainstream in design. Ignoring the actual predominant ideas, his visionary creativity again unifies past, present and future into a timeless design. It reflects his vision to combine the opulent, baroque design of his opus futura maximal collection with the reduced, simple and clear lines of the minimal collection.