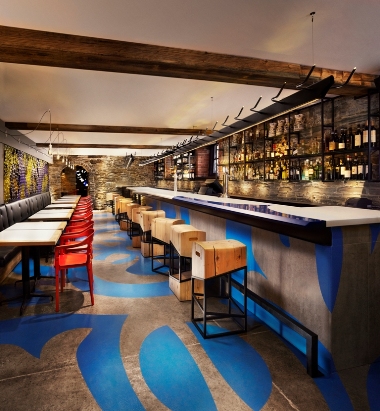 The mostly-subterranean space evokes the intimacy and vibrancy of Barcelona, where tapas restaurants emerge from the most unexpected places. Both the client and the designer John Tong have spent a considerable amount of time in Gaudí’s city, and shared the excitement of capturing that energy in the creation of Barsa.
Fittingly, the original site had its own challenges. Located in a historical building across from the world-famous St. Lawrence Market, the 3,000-square-foot site was dingy with low ceilings, and was so dark the only way to explore the space was by flashlight. In fact, part of the space is under the sidewalk. And because of the site’s historical status, Tong and his team had numerous restrictions to work around – the windows, mason stone walls, and main door all had to remain untouched.
Designing within these parameters, +tongtong transformed the derelict space by injecting animation while maintaining the site’s historical integrity. The result is a sleek, edgy interior that balances freeform expression and modernist architectural language.
The bar area is defined by a swirling, vibrant blue graphic floor pattern, a design that was extrapolated from the Gaudí-influenced tile in the main dining room. A computer-generated adhesive stencil was laid down on the new concrete floors, and then coated with epoxy paint. The design runs up the sides of the kitchen walls and the bar, which integrates a blown-up version of the same pattern.