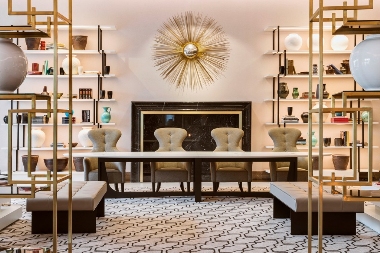 Located in the exclusive district of Malabata baie, the Hilton Tangier has double views: a panoramic one of the Mediterranean, while also boasting charming views of the Acharf neighborhood, reminiscent of a traditional Moroccan village. In order to create a haven of tranquility in an emerging and busy city, Jaime Beriestain has designed the Hotel Hilton Tangier with a mixture of European and ethnic style. Thanks to this dual combination, the result is a refined, sophisticated, timeless and tasteful hotel in a contemporary Morocco thanks to the Ethnic Chic touches introduced by Beriestain. The local craftsmanship has been a major influence for the designer in this project as is reflected in Beriestain's personal reinterpretation of traditional Zellige pottery, along with traditional Moroccan textiles with geometric motifs and various contributions of local craftsmen such as brass and the use of Tadelakt coating. All are part of the hotel’s identity.
It is a hotel with volume and space, but in turn, with intimate touches. In keeping with the high standards of the Hilton hotel chain, Beriestain has been very rigorous and demanding in the design of each piece of furniture and object, as well as lighting. Most elements of attrezzo, carpets, mirrors and lamps have been purchased in different Moroccan souks. The color palette is inspired by the chromatic range of the desert, with hues of bone and sand, which help bring light and warmth to the space.