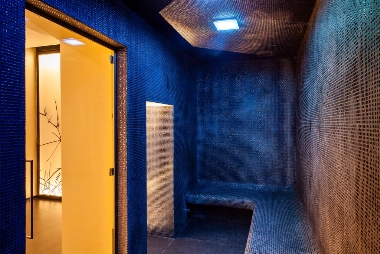 Located in the basement of the Regina Baglioni Hotel in Rome, the new spa designed by Rebosio+Spagnulo completes the many interventions that have defined the new character of the prestigious Baglioni Hotel located in Via Veneto.
The 230 square meters include the reception and changing rooms, two massage rooms and a beautician lounge, gym, sauna and steam bath as well as a large Jacuzzi. In terms of distribution, the project follows a rational and effective hierarchy of paths in order to facilitate the service and, at the same time, ensure the necessary instances of customer’s privacy.
The interior project is the result of a careful research about light and textures. The atmosphere is intimate and enchanting thanks to the exclusive use of indirect lighting, intended to draw the architecture rather than to simply "light up". The light, used as a material, flows along the walls and the ceilings defining contours, appearance and consistency. The light could become itself the surface by the use of backlit panels with stylized branches, referring to oriental atmosphere.
Very close and evanescent lights perfectly blend with the different textures chosen for the surfaces. Relief mosaics, brushed woods, three-dimensional ceramic tiles and especially the particular finish wall called "Fil posè" - that mimics the "wrinkled" and iridescent effect of silk - return material and deep impressions to the architecture of the interiors, creating complex effects of vibration.
There are also some particularly refined aspects of design, such as the circular Jacuzzi that lies on the white pebbles surrounded by bright walls. The concept of wellness is declined according to a new decorative and conceptual syntax in which the care of the place reflects the same attention to the body.