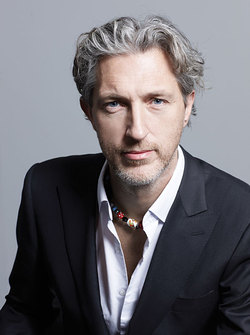 Marcel Wanders (Boxtel, 1963) graduated cum laude from the Hogeschool voor de Kunsten (ArtEZ Institute of the Arts) in Arnhem in 1988 after being expelled from Eindhoven Design Academy. In 1995 he opened his studio in the beating heart of the Dutch capital, Amsterdam, quickly coming to worldwide attention in 1996 for his iconic Knotted Chair, which paired high tech materials with ‘low tech’ production methods. Today Marcel’s powerhouse studio numbers around 50 international design specialists, and he is a prolific product and interior designer and art director, ubiquitous with over 1700+ projects to his name for private clients and premium brands such as Alessi, Bisazza, KLM, Flos, Swarovski, Puma, among scores of others. Regarded by many as an anomaly in the design world, Marcel has made it his mission to “create an environment of love, live with passion and make our most exciting dreams come true.” His work excites, provokes, and polarises, but never fails to surprise for its ingenuity, daring and singular quest to uplift the human spirit, and entertain. With this track record, it’s no surprise that theNew York Timesdubbed Marcel the “Lady Gaga of Design,” or thatBusiness Weekselected him as one of Europe’s ’25 leaders of change.’ In 2006,Elle Decorationawarded Marcel the prestigious title of ‘Designer of the Year.’ Other award wins include the Philadelphia Museum of Art's modern design collaborative award, Collab, and the Design Excellence Award for Marcel’s significant contribution to the field of design in 2009. In his designs Marcel often mixes innovative materials and techniques with references to well known historical styles and archetypes, so users can easily connect to the pieces, enjoying them for a long time and in doing so create sustainable surroundings. Marcel’s chief concern is bringing the human touch back to design, ushering in what he calls design’s ‘new age;’ in which designer, craftsperson and user are reunited. In his process, Marcel defies design dogma, preferring instead of focus on holistic solutions rather than the technocratic. In Marcel’s universe, the coldness of industrialism is replaced instead by the poetry, fantasy and romance of different ages, vividly brought to life in the contemporary moment. In 2001 Marcel co-founded the successful design label Moooi, of which he is also Art Director. Conceived as a platform for design talent from around the world, today the company works with around 30 designers, has a presence in 79 countries and is renowned for its quirky, eccentric but altogether inspired take on the objects that surround us.