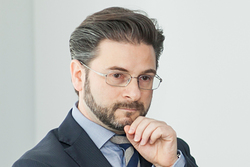 Alberto Apostoli was born in Verona - Italy in 1968. After studying industrial electronics, he went on to read architecture at Venice University, graduating in 1993 with a thesis on economics.
In 1997 he set up a professional and multifaceted practice, taking inspiration from his personal, academic journey. In 2006 his first exhibition, entitled “Architetture Con­taminate tra Comunicazione e Design” (ArchitectureInfluenced by Communication and Design), was held at the headquarters of the European Parliament in Brussels, attracting the attention of the European press.
Also in 2006 he opened his own practice in Guangzhou (Canton – China) followed in 2007 by a branch in Casablanca (Morocco).
In 2010 he developed the engineering division and set up Studio Apostoli & Associati. This brand offers Integrated Planning and Project Management services.
In 2012 he published his book “Architettura delle SPA” (Wellness Centers Architecture).
In 2015 he was Vice President of A.I.P.I (National Association of Interior Design). Alberto Apostoli’s interests extend to various professional fields and aim to redefine the architect towards more holistic and interdisciplinary objectives.